With the car all washed, polished and mostly red dust free, it was time to move on and explore some more of this beautiful country.

The Atherton Table Lands did not disappoint. We had been through there previously on our first travels back in 2000. The waterfalls were still as beautiful especially the Mila Mila Falls and the surrounding landscape was green with lush pastures, how soon that would change.

We were heading to Cobbald Gorge for some work that Cam had teamed up with our Cape York friends. Josh has been doing some mechanical work out there and they had spoken about it and told us to drop in, even before Cam got work there. It’s funny how you picture something in your mind as to what it might look like but it was certainly nothing like what I had thought.

I was expecting a farm stay type place, but instead it was like an outback resort that catered for caravans, campers and had cabins aswell.

With a bar, restaurant and infinity pool, what more could we ask for. There were kayaks to paddle around on the dam and tours of the Gorge with an educational walk in which the guide spoke about the bush tucker food that could be eaten and the ones NOT to eat. There was even a tree that you could pick the leaves and use as soap, a natural way to have a wash without hurting the rivers etc.

We took a ride on the boat to explore the Gorge, It was pretty amazing to see, but we still didn’t see a croc.

On our last day we went down to a dry river bed to hunt for Agates, a fun little excursion and to our surprise we found a few, nothing extraordinary, but it was interesting and I can understand how fossicking could become addictive. Once you found one you were determined to find another.

We then headed off, destined for Lawn Hill, via Normanton and just when we thought we had overcome ruts and red dirt, there was more, ALOT more.

It was my turn to drive, so at the turn off at Gregory Downs, I jumped in and off I drove, caravan in tow. The gravel road began and it was a little corrugated but I’ll be right, (so I thought) I’ll just take it easy, 5 minutes in and I pulled up and thought that it would be better if I was a passenger again. It was like driving on marbles. It did improve but I was not confident.

Arriving safely at Adels Grove, Cam checked us in and I thought I’d take a peak in the van to see how it handled the road. I wish I’d never looked. Hmmm the microwave had jumped ship and was on the floor, narrowly missing the glass lid for the stove top. The shower screen panels had come of the runners and had fallen into the shower unbroken, broken drawers strewn across the floor and just a bit of dust😫. It could’ve been worse, it could’ve been better too, but no point stressing.

We set up camp, Cam put the van back together (thank god he’s got all his tools with us) luckily nothing too major. Finally time to grab a beer and go and have a look at the swimming holes at the park down in the Grove, Omg, it’s so beautiful, the water was emerald green and up close it was the clearest water I have ever seen. If your ever going to Lawn Hill np, I recommend staying at Adels Grove. It’s beautiful.

Cam did a few hours of work at the park to cover our accommodation and he must have impressed as we got free kayak hire thrown in as well. So after lunch we traveled around to the Gorge. We decided to do the walks that day and kayak in the morning. The scenery on foot and by water was beautiful. Climbing up the steep escarpment we got full view of the Gorge, it certainly is a site to be seen, however by water was just as good.

The next morning we headed back into the Gorge to make the most of our free kayak hire, Cam and Marcee in one, Ilueka and I in the other. It was a little intimidating knowing there were crocs out there but, only fresh water Crocs which apparently aren’t to dangerous. I didn’t particularly want to test that theory mind you..

We paddled up as far as we could go, then dragged the Kayaks over the rocks and around a waterfall to paddle up further to the end. It was magical, the water with the lily pads and flowers set the scene. We had a swim at the little water fall on our way back down, the water was so warm but kinda eerie knowing there were crocs around. 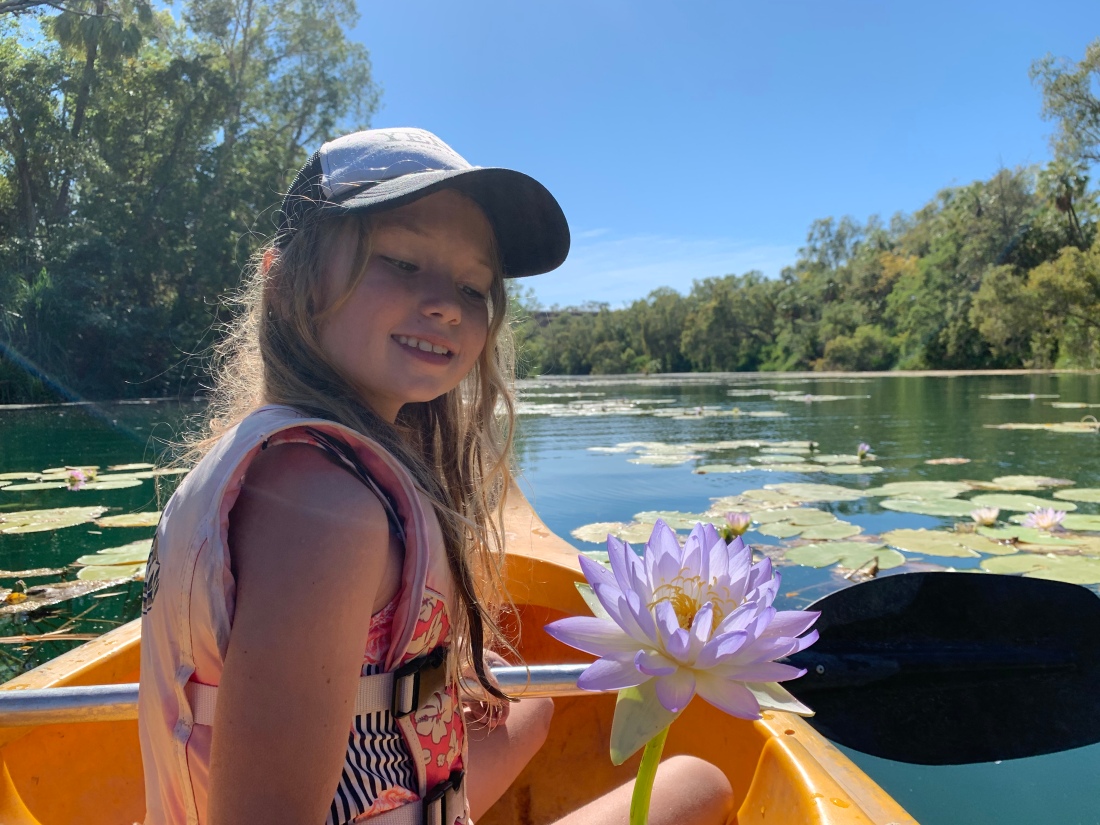 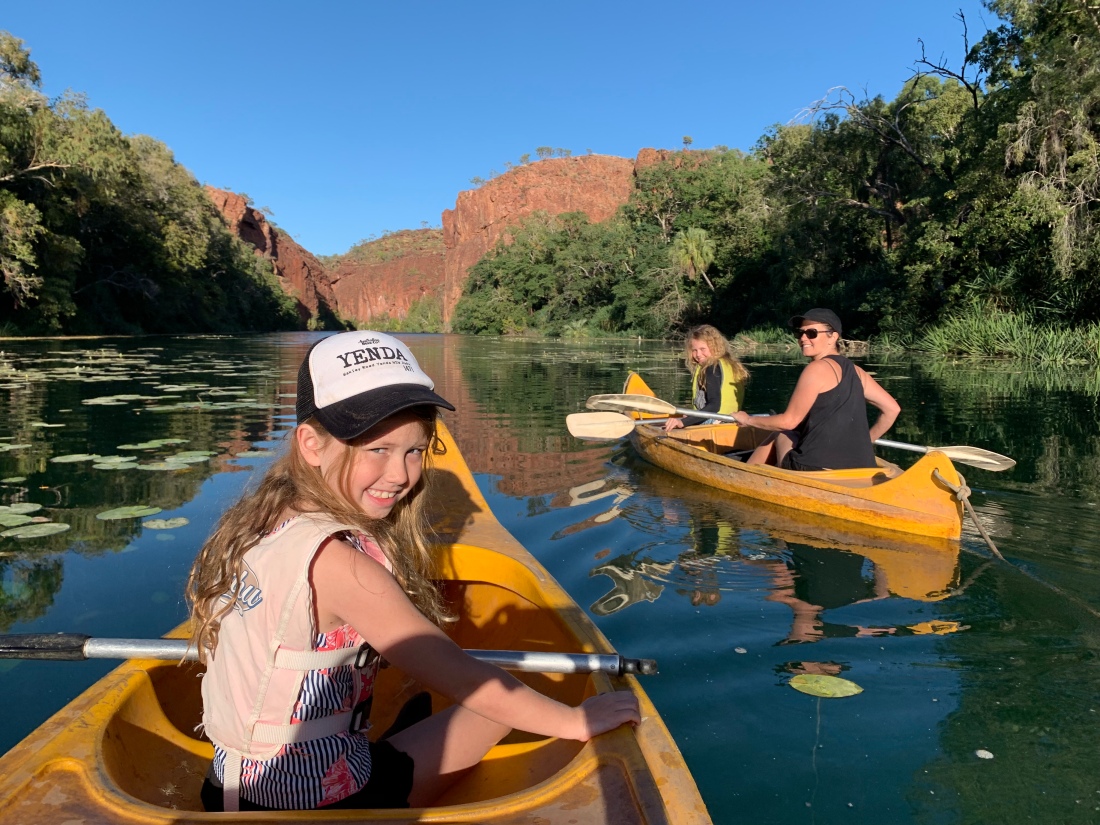 We returned back safely, still no site of a croc.

After speaking to some other campers and locals, we decided to go the back road through the station to get back onto the Gulf road as it was a short cut and in better condition than the one we came in on.

The land was so dry, the Brahman cattle huddled in together under trees and around water troughs, they didn’t appear to be in to bad a condition though.

BULL DUST…….I hadn’t really seen it before and I don’t care to ever again. There were stages when we hit big patch’s of it that we couldn’t even see our van behind us. We pulled up at Hells Gate Roadhouse, it was everywhere and it was at this point I kinda cracked it a little.🥺

Hells Gate, it’s in the middle of nowhere but was still quite busy with other tourists. That evening a guy put on a performance with fire twirling and had some LED Poi’s for the kids to twirl around which was quite entertaining, there were a few hits to different body parts 😂.

Cam managed to do a few hours of work here, paying for our stay and for a few beers.

The next morning we headed over the Northern Territory boarder and into Borroloola, then onto King Ash Bay to catch up with Mick and Andrea McCullogh and Luke and Mika Shackleton. Their 3 kids and our girls hit it off, I think they were all pleased to have some different faces to hang out with.

We can’t thank Mick and Andrea enough for taking us out on their boat fishing, we may not have caught a truck load, but the adventure was great. We saw a huge grouper and at long last a few Crocs.

We stayed there for a week in the end, it gave us time to clean out the red dirt from the van and try and seal up a few openings where the dust was coming in. We also caught up with another traveling family the “Geatches.” They invited us for a BBQ and some fishing off the bank at their camp site. Marcee was the winner this night with the most amount of fish caught. Cam and Joe got a nice Bream and a Grunter as well. 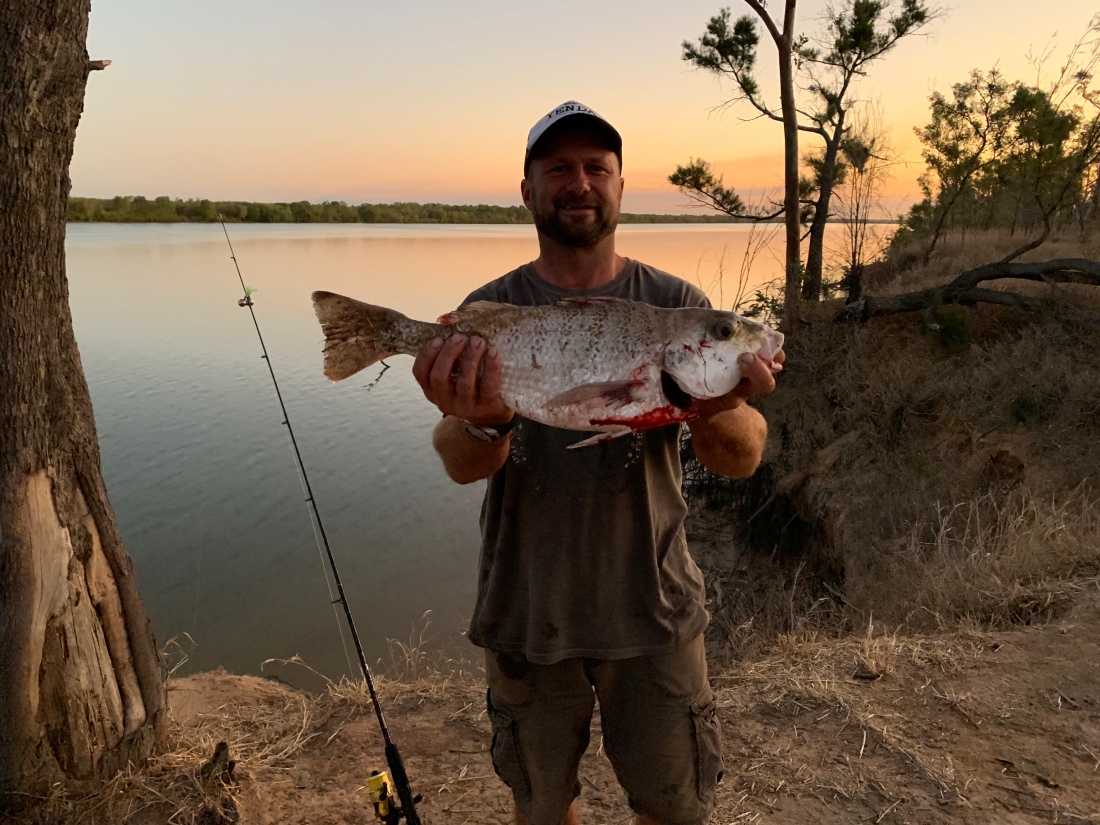 We stopped back in Borroloola to fill up with Diesel and in the shop was a cute baby crocodile. I’m sure it would be great…..as a short term pet……..😳🐊

Not sure if you’ve heard of the Daly Waters Pub but it’s something you need to check out if ever up this way. The memorabilia is unbelievable. Hundreds of pairs of undies and bra’s hanging everywhere as it is tradition to leave a pair behind, business cards, photos, crutches, antiques the list goes on. Live music just about every night and a nice relaxing pool that was the perfect temperature to relax in. 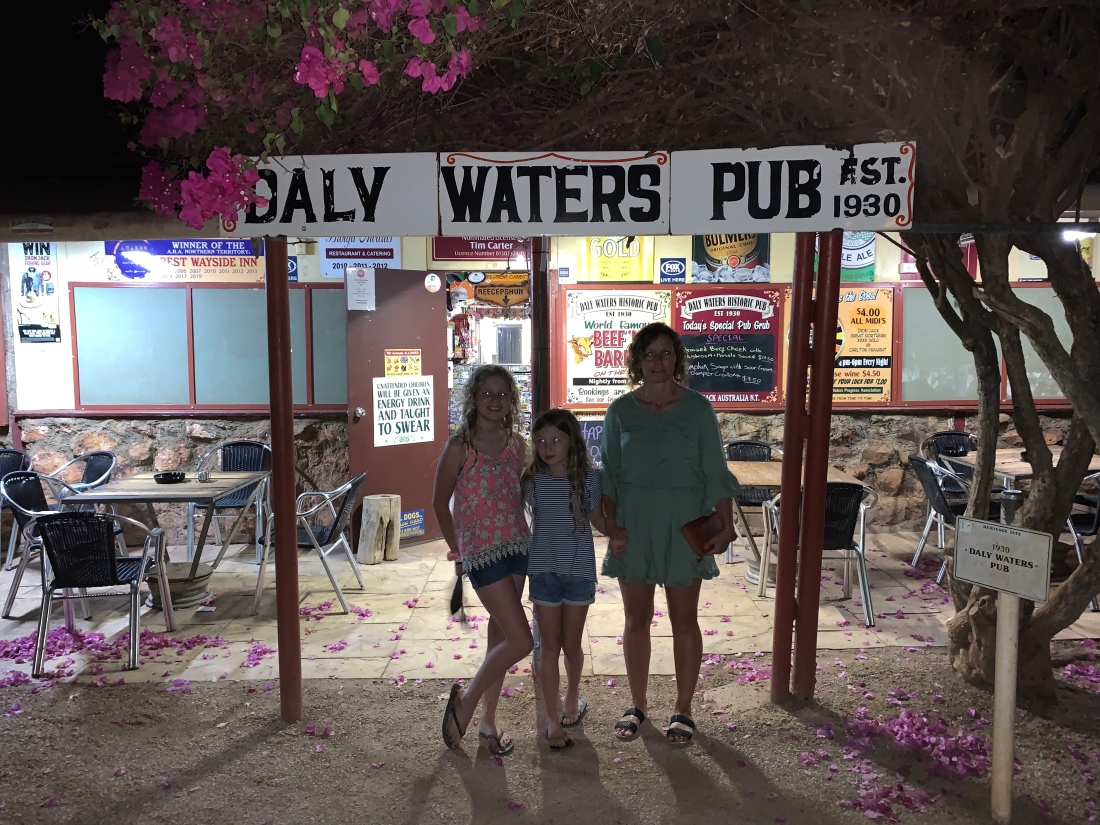 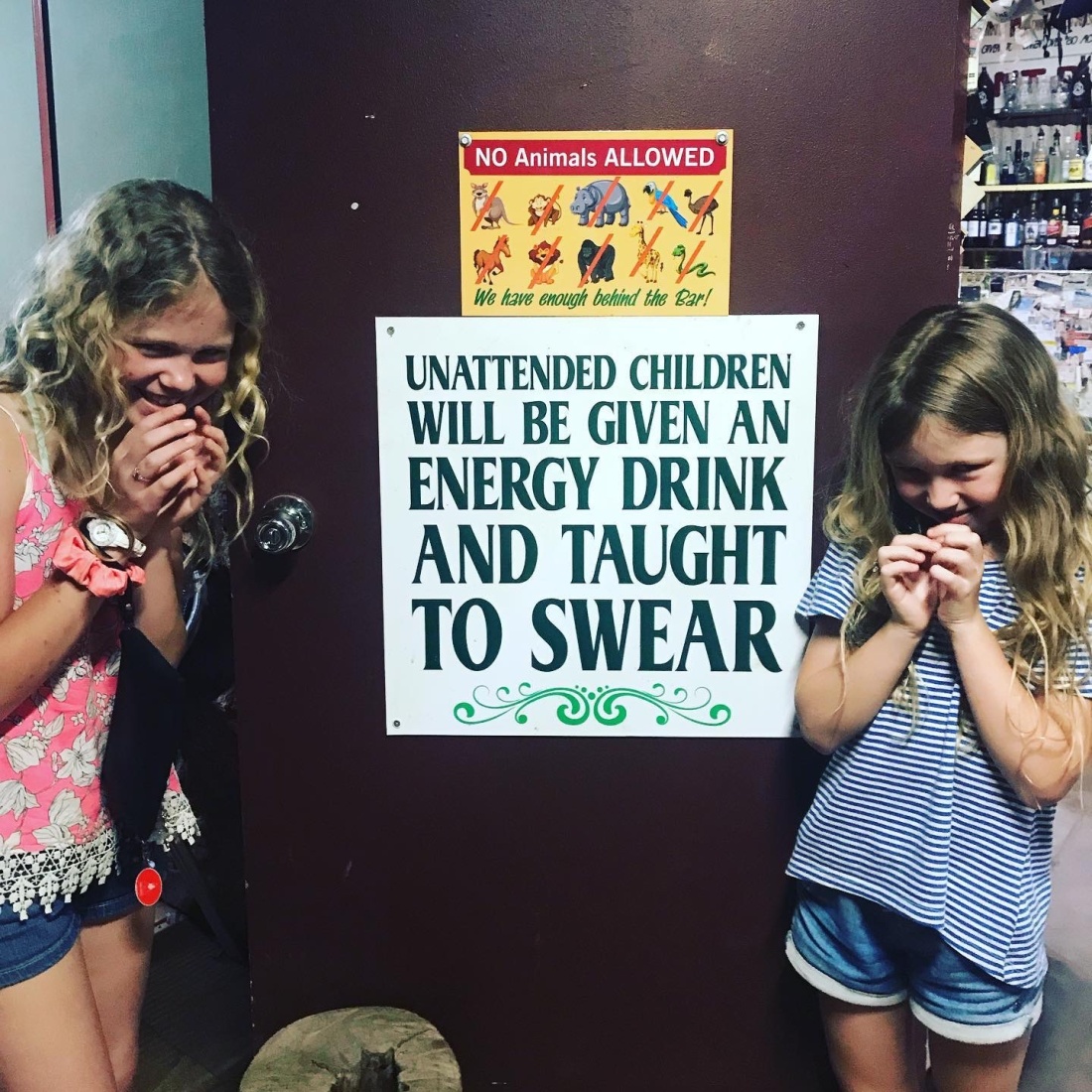 The next morning we stopped in at Mataranka hot springs, its like a bath. I could just walk straight into it, none of this easing in. The girls got in trouble from a couple of grumpy old grey nomads for jumping in and doing bombs!😂

Katherine springs were amazing also, if not better. We had a swim in the arvo and then a quick dip in the morning to freshen us up for our final stint to Darwin.

We set up in a van park in Coolalinga and Cam got a weeks work there helping with plumbing repairs as the new owners are in the process of doing up the park. 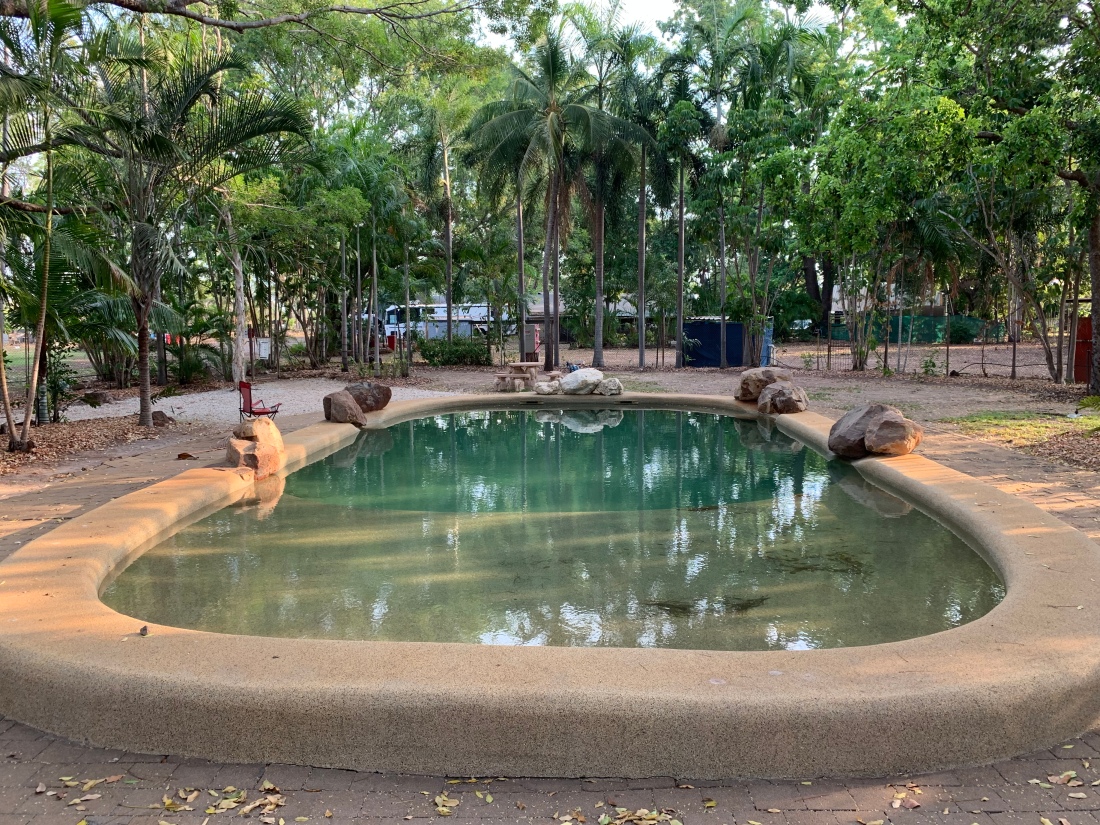 We weren’t planning on staying much longer than a week then doing Kakadu and Litchfield parks then head West, but as fate has it, when we caught up with a guy we had met 20 years ago in Cairns that hunts and taxidermy’s Crocs, Mick Pitman, he just happened to be a plumber and was going overseas the next day for 4 weeks and asked Cam if he wanted to fill in for him, which worked out perfect as Johnny and Carol wanted to come up to Darwin for visit around the time he finished. 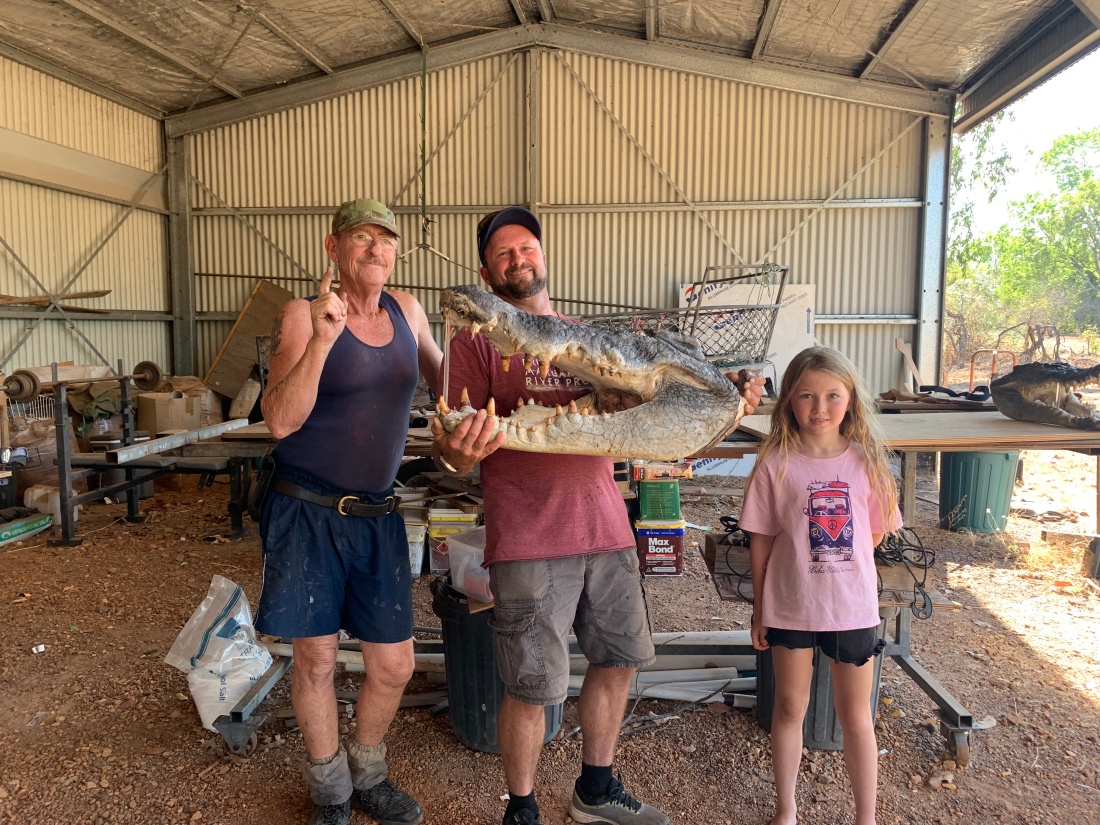 We had a night with them at Coolalinga then headed off for Kakadu, they stayed back in Darwin to catch up with some other friends before meeting us at Litchfield np latter that week.

We loved Kakadu, the remoteness, the landscape and the adventure, including some fairly rough roads and decent walks into some of the places, over rocks and rugged ground in 40 plus temperatures makes for quite a few “how much further” comments from the girls! The swimming holes at the end make it all worth while though.

Watching the Crocs feed at Cahills crossing on high tide, Jim Jim, Maguk and Gunlom falls along with the view and Aboriginal rock art at Ubirr was all a highlight. The caravan parks in Kakadu are beautiful too. 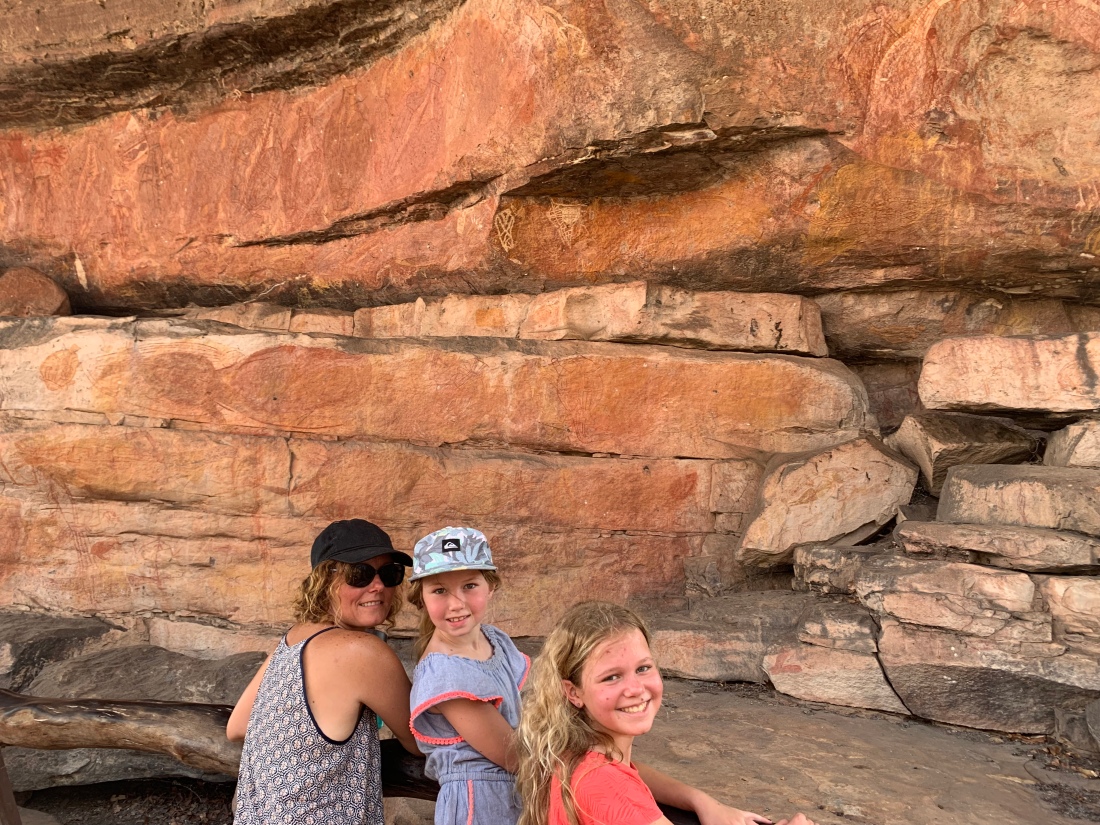 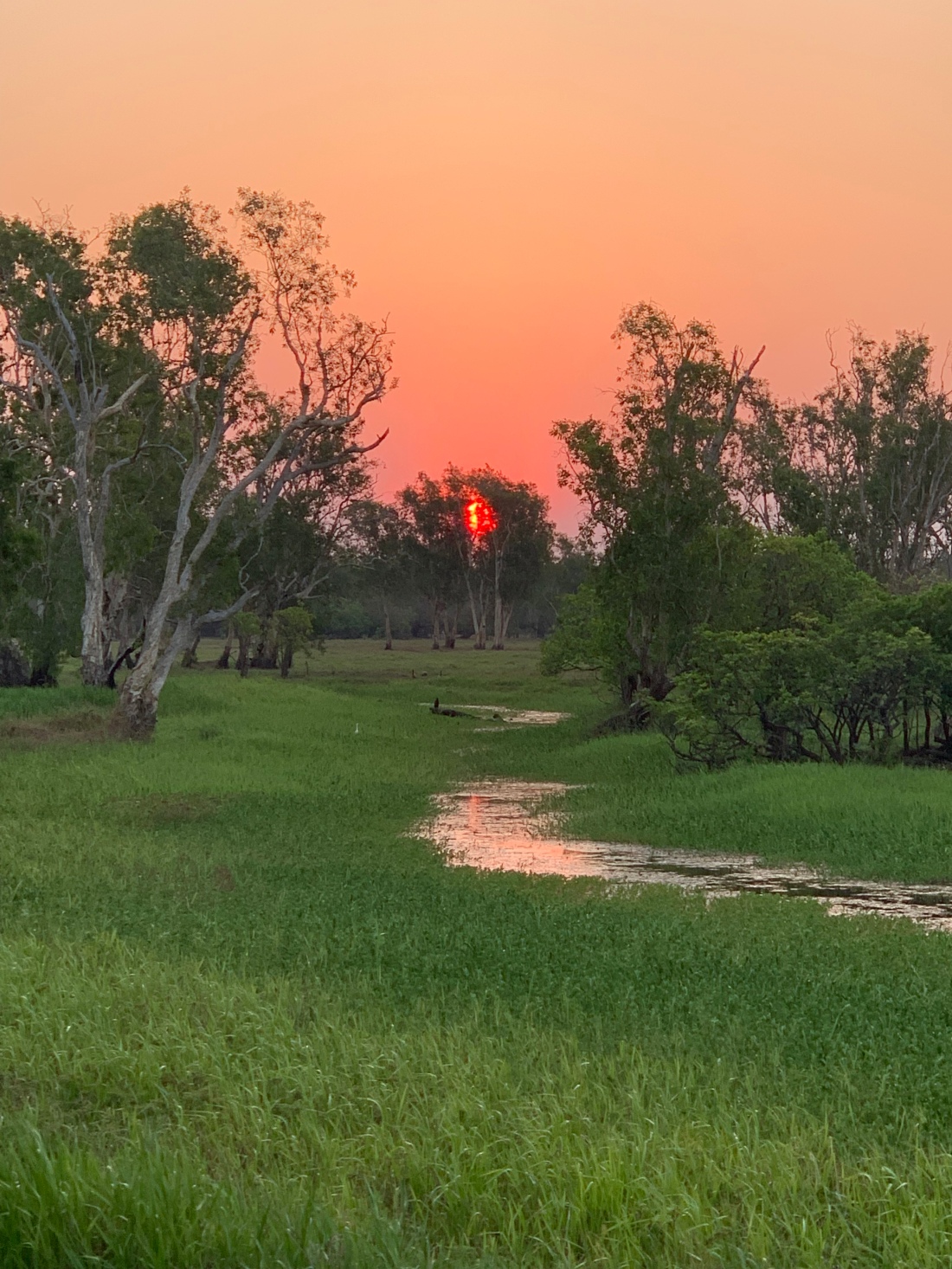 Then onto Litchfield np to meet up again with Johnny and Carol. It just so happened that the owner of the Banyan tree caravan park where we were staying was good friends with a few people we know back in Tassy, needless to say, this had set us for big night. Johnny on the guitar, all of us the shots (compliments of Johno the park owner) and eventually me dancing on the table in the dining area at the bar…… then eventually passed out on the chair later that night, surprise surprise!😬 Needless to say we were all a little slow off the mark the next morning.🥴

Then eventually after eggs and bacon and few cuppa’s we headed off to check out Litchfield, Buley waterhole first, then Florence falls, which we all said was probably the prettiest swimming hole we’ve ever been to, a beautiful walk in, a beautiful waterfall and warm, crystal clear water. It’s stunning. We finished off the day with a trip into the Lost city which is a formation of ancient sand stone pillars and quite interesting. 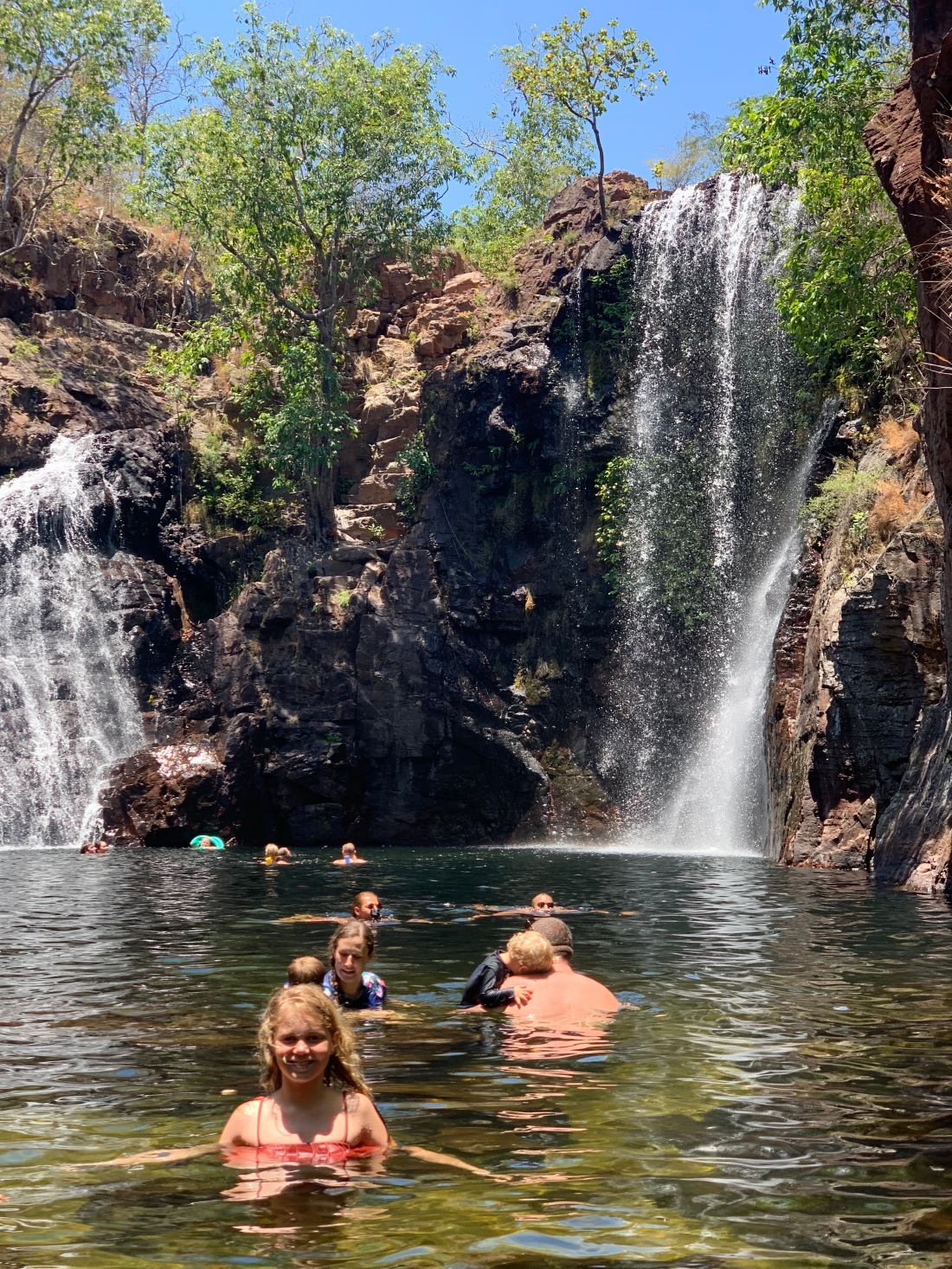 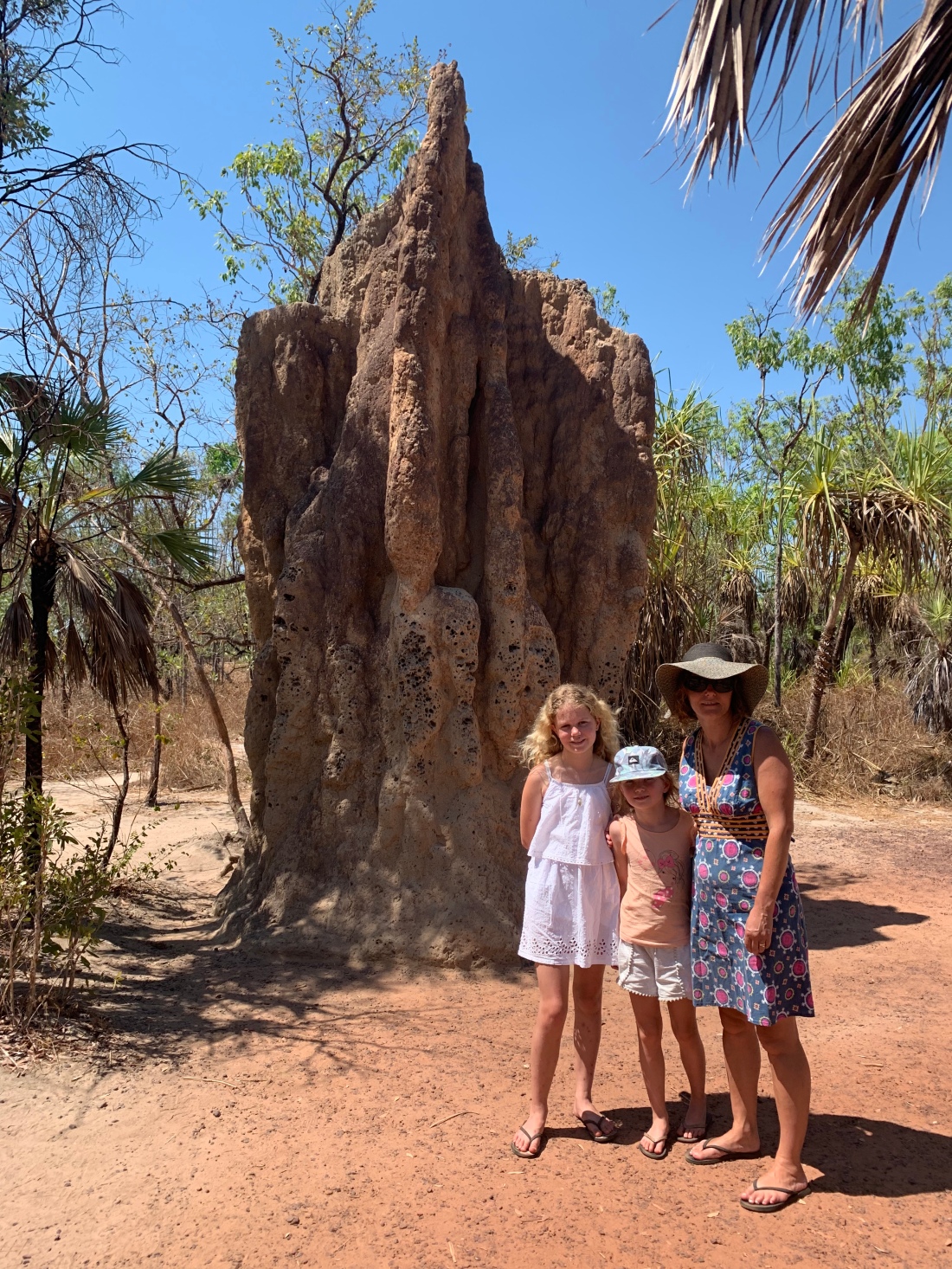 That night was a bit quieter and the next day a stop at Wangi falls for a swim and then back to Coolalinga. The next day Cam and Johnny went on a fishing charter with a couple of other mates, lots of fish caught and a bit of banter too apparently.

It’s now time to say goodbye to the NT as we left this morning bound for WA. It has definitely been good to us and we have thoroughly enjoyed our time in the Top End.

2 thoughts on “Queensland to the Northern Territory”